Not to be confused with Pokemen 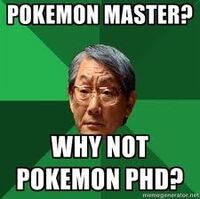 Pogeymans are magical creatures who despise humans for catching and training them for illegal fighting matches. In general, Pogeymans are ugly, repulsive creatures, making them prime for abuse by abusive humans.

Pogeyman Battles are gruesome contests of strength (and occasionally contests of staring) between two (or more) abused and under-appreciated little Pogeymans (and occasionally some big ones, too).People who abuse Pogeymans are referred to as "Trainers", and the Pogeymans are referred to as "Pogeymans". The Pogeymans take turns (how nice of them!) pounding each other, until one of them is killed, resulting in a cash prize for the winning trainer. Some Trainers battle Pogeymans using various strategy techniques, though most just spam the most powerful move the Pogeyman they chose has.

The most often chosen Pogeyman, Master Stone Fist kills other Pogeymans with his deathly gaze. Nobody stands a chance against him. If two are pitted against each other, the slower one dies.

Pinkachu sucks according to most trainers, but according to Tiger's research, they are simply hard to train because they are very stubborn, resulting in a bad Pogeyman.

RAGEGUY attacks along with Santa. Never bring a RAGEGUY without a Santa. Case closed.

Santa despises RAGEGUY for stealing his abilities to augment his own. What a jerk.

Nobody loves Garbojerk. They use him just for the pleasure of seeing him killed. They hate him because he is so ugly, and that might be fine, except for he's also a total jerk. He's even worse than RAGEGUY.

Looney Bird is the evolution of Chatot, acquired when one feeds their Chatot copious amounts of alcoholic beverages. Although Looney Bird possesses the strength to take down Master Stone Fist single-handedly, he is unfortunately bottlenecked by his constant state of drunkeness. As a result, Looney Bird has a hit rate of only 1/256.

Gardevoir is a pretty (see what I just did there?) popular Pogeyman, and the only Pogeyman that could ever be considered beautiful. In fact, she (or he) is so beautiful that she has a following of OVER 9000 male Pogeyman Trainers. It also helps that she can teleport and do other cool stuff. Just beware of the male versions.

The most newly-discovered Pogeyman, Nyan Cat is the preferred Pogeyman of trainers who like to use speedy ones.

Retrieved from "https://trollopolis.fandom.com/wiki/Pogeymans?oldid=6023"
Community content is available under CC-BY-SA unless otherwise noted.